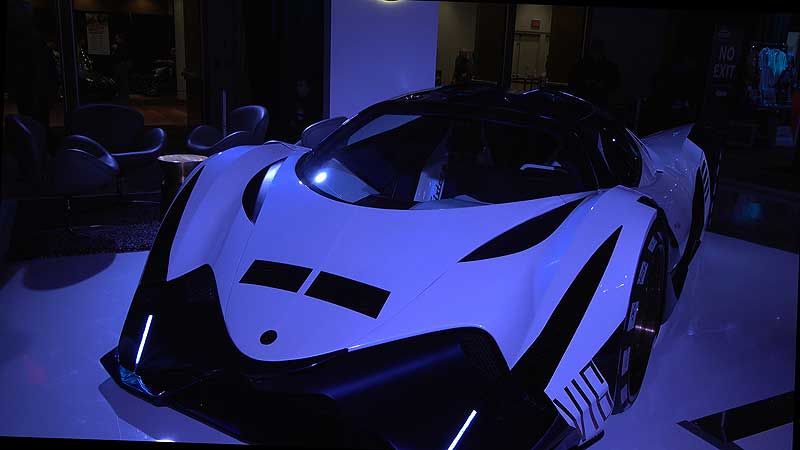 - Mysterious and powerful, the Devel Sixteen makes its North American Debut in Toronto.

One of the world’s most mysterious and powerful hypercars made its North American debut at Toronto’s Canadian International AutoShow.

With the top-end model boasting a V16 engine and an amazing 5,007 horsepower, the Devel Sixteen has had car enthusiasts on edge. The prototype of the production model was first seen in Dubai in 2017 and it has also been showcased in Paris, but never on this side of the Atlantic.

“The Devel Sixteen is catching eyes around the world, including those of Toronto’s hip hop megastar Drake,” says Mr. Al Attar. “We are looking forward to bringing the Devel Sixteen to Toronto as we get ready to put the car into production later this year.”

The Devel Sixteen will come in three models. A V8 model will be available for an estimated $1.6 million, a mid-level V16 pushing 3,000 horsepower will retail for $1.8 million and the massive V16 with 5,007 horsepower will go for $2.2 million.

The top-end engine is a quad turbo V16 in a single billet block.

Devel Motors was founded by three brothers from Dubai who share a passion for cars. From the outset, they wanted to create something unique and powerful, with visions of a car inspired by the look of a jet fighter.

“We were working to have the world’s most powerful production car,” says Mr. Al Attar. “There wasn’t a V8 that could give us the power we wanted to produce, so we started working to create our own engine.”
The car now is a centerpiece in the AutoShow’s ever-popular Auto Exotica feature, presented by Castrol.