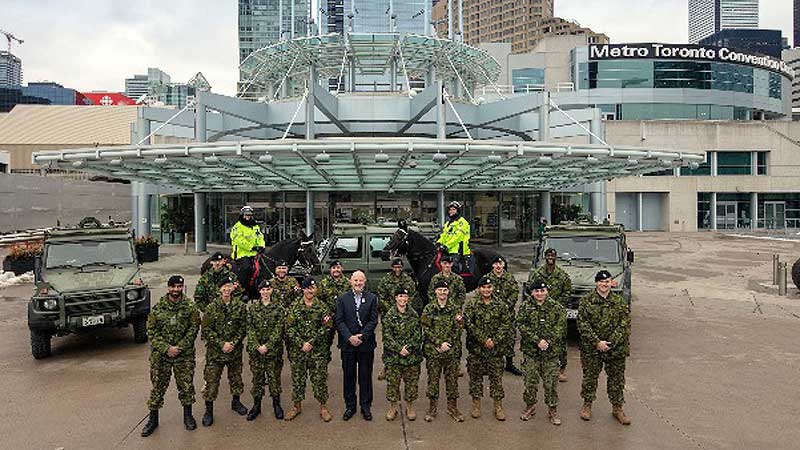 Heroes Welcomed at the AutoShow

Emergency services personnel and Canada’s armed forces were feted at the Canadian International AutoShow Thursday during Heroes Welcome Day, presented by the 407 ETR.

It was the annual Heroes Welcome Day at the Canadian International AutoShow on Thursday, with members of the Canadian armed forces and emergency services personnel enjoying discounted admission to the show.

Presented by 407 ETR, the day started with what has become an annual tradition — a group photo in the Ceremonial Circle at the south entrance of the Metro Toronto Convention Centre on Bremner Boulevard. This year, the photo included 16 members of the armed forces, two members of the Toronto Police Service mounted unit, the military-issue Mercedes Benz G Wagons and AutoShow President Larry Lantz.

Following the picture, the group moved down to the Military Zone, a special exhibit at this year’s AutoShow that showcases modern and historic military vehicles used by Canada’s service men and women, including a Second World War-era Sherman Tank and Willy’s jeep and modern personnel carriers and armoured vehicles.

“Our armed forces, police officers, fire fighters and paramedics rush into situations that most of us are running away from,” said Mr. Lantz. “It is the least we can do at the AutoShow to honour them with a special day.”

As the AutoShow heads into its final weekend for the 2019 event, there is plenty on tap to entertain and engage people.