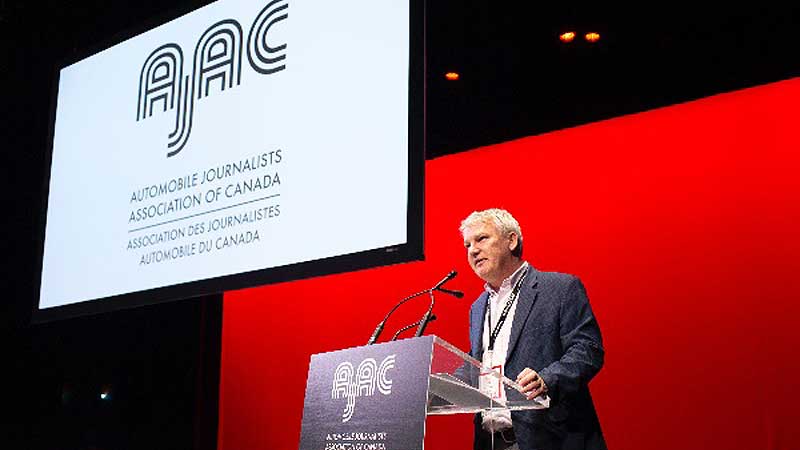 The Future of Mobility

- AJAC, U of T shine a light on the future of driving.

The Automobile Journalists Association of Canada honoured investments in making driving safer and smarter on Wednesday at the Canadian International AutoShow. AJAC President Mark Richardson handed out Innovation Awards to Mercedes-Benz for its MBUX user experience, Infiniti for its VC turbo engine and Subaru for its safety features.

Tnnovation and the future were in the spotlight Wednesday at the 2019 Canadian International AutoShow.

In a special event at the John Bassett Theatre at the Metro Toronto Convention Centre, the Automobile Journalists Association of Canada handed out three special Innovation Awards, following a conference by the University of Toronto Transportation Research Institute on the future of mobility in the Greater Toronto Area.

“The Innovation Awards now recognize safety, environmental awareness and technology,” said AJAC President Mark Richardson. “This is an opportunity to recognize the very best and most innovative examples of new automotive products available to Canadian drivers.”

Recognized by AJAC were:

- Infiniti’s VC-Turbo engine is the world's first production-ready variable compression ratio engine and one of the most advanced internal combustion engines ever created. More than 20 years in development, it represents a major breakthrough in internal-combustion powertrain technology. It delivers the power of a high-performance 2.0-liter turbo gasoline engine with a high level of efficiency.

- Subaru’s DriverFocus utilizes a camera angled at the driver’s face and facial recognition software to monitor fatigue or lack of attention. When the driver begins to lose focus, DriverFocus immediately sends out a helpful alert — it’s like an automated co-driver.

- Mercedes-Benz’s MBUX uses artificial intelligence to adapt to suit the user, creating an emotional connection between the vehicle, driver and passengers. It includes the high-resolution widescreen cockpit with touchscreen operation, navigation display with augmented reality technology, plus intelligent voice control with natural speech recognition, which is activated with the keyword, “Hey Mercedes.”

The UTTRI conference touched on key elements of a future where automated vehicles are the norm, including the positive impacts on parking (you can have your car drop you at your destination and leave it to find its own parking space), changing public policy to accommodate automated vehicles, testing autonomous cars in real-world conditions and how car companies are preparing for this new future, such as GM’s commitment to a “triple zero” future: zero emissions, zero crashes, zero congestion.

Dr. David Wolfe, a political science professor at the University of Toronto and a co-director of the Innovation Policy Lab at the Munk School of Global Affairs and Public Policy, said Ontario’s investments in research have created foundation on which it can remain a North American leader in the automotive sector. It is a great time to be beginning a career in transportation because the sector is on the cusp of transformation.

“We are at risk of disruption because the whole transportation sector is undergoing the most profound change it has experienced in the past 100 years,” he said.

It was also noted how improved transit benefits even the most ardent car-lover. Dr. Eric Miller, a professor of civil engineering at the University of Toronto and Director of the UTTRI said a good transit system is an essential component of any large city in the world.

“It’s not a nice to have, it’s a must have,” he said. “A good transit system removes millions of people from the roads, making life better for those on the highway.”

The AutoShow, continuing at the Metro Toronto Convention Centre until February 24th, had another record-setting attendance day on Tuesday with 28,979 patrons visiting — breaking the old record set in 2017 by more than 5,000 people.