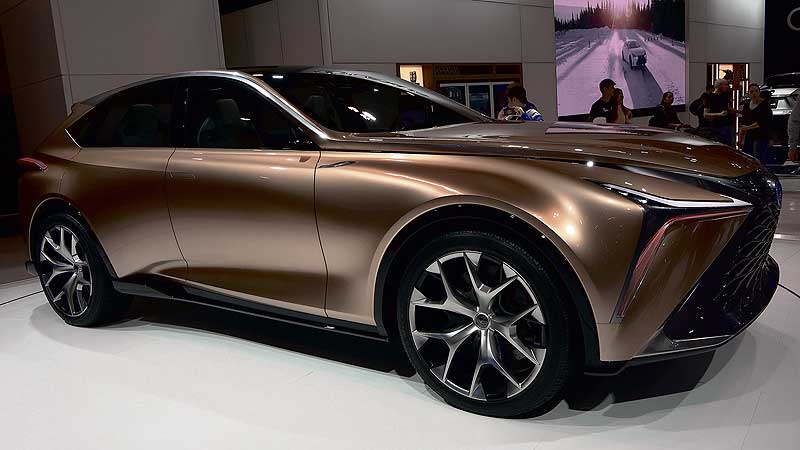 Imagine a more human future, beyond limitations. That’s the promise of the Lexus LF-1 Limitless – a prestige luxury crossover concept making its Canadian debut this month. The LF -1 Limitless headlines an amazing display of luxury without compromise in the Lexus exhibit at the Canadian International Auto Show, February 15-24, 2019 at the Metro Toronto Convention Centre.

“The Lexus LF -1 Limitless is the embodiment of the luxury vehicle of the future. It is our vision of Lexus style, vehicle autonomy and electrification,” said Robert Tsang, Director of Lexus in Canada. “And while it is a concept, we invite Guests to explore our exhibit and see the advanced technologies available today across our line-up – technologies such as Lexus Safety System+ and self-charging hybrid electric powertrains.”

With the LF- 1 Limitless Concept, Lexus engineers have created a vehicle that can be powered by a multitude of electrified powertrains – including fuel cell, self-charging gas-electric hybrid, plug-in gas-electric hybrid, and pure battery electric. This flexibility expresses the Lexus commitment to offering Canadian guests an ever-increasing range of luxury vehicles that minimize tailpipe emissions.

At the same time, the LF-1 Limitless Concept demonstrates the Lexus approach to autonomous vehicle technology with “Chauffeur Mode”. This technology suite allows for complete hands-free operation, thanks to the vehicle’s by-wire steering, braking, acceleration, lights and signals. The result is smooth, carefree driving with maximum efficiency and reduced risk of accidents.
Curbside, the Lexus LF-1 Limitless Concept makes an immediate impression, with a precisely sculpted exterior that showcases dramatic lighting and fluid design elements enhanced with details such as a panoramic glass roof and a distinctive split rear spoiler. Inside, the cabin has been designed to provide exemplary hospitality – and welcomes all who enter with unmatched care and enthusiasm, highlighted by features such as shimmering accent lights that create a feeling of warmth and wonder.

While the LF-1 Limitless is a concept vehicle that suggests an evolutionary path for the Lexus luxury crossover, Canadian drivers don’t have to wait to Experience Amazing. Many of the technologies embodied in the LF-1 Limitless are natural extensions of those already being deployed in an impressive selection of luxury crossovers, SUVs, coupes and sedans that will be on display at the auto show. An example of this is Lexus Safety System +, a bundle of active safety technologies that is integral to autonomous vehicle development. LSS+ was introduced on select 2017 models, and in just a couple of years has become standard equipment on 98 per cent of all new Lexus models sold in Canada today. Already, Lexus is rolling out the next generation of this bundle – LSS+ 2.0. This features significant enhancements and is standard equipment on select 2019 models.

These include the 2019 Lexus UX series – the newest member of the Lexus family. This compact crossover is tailor made for modern urban explorers. It drives like a performance sedan, expresses brave styling and master craftsmanship from every angle, and features intuitive technologies that keep Lexus guests connected to the people and things that matter to them. The UX series is headlined by the UX 250h all-wheel-drive, self-charging hybrid electric, which went on sale in January to terrific response from Guests.

There’s a lot more to experience in the Lexus exhibit as well, including:
- An extensive display of luxury coupes, sedans, crossovers and SUVs – including the recently updated NX series, the long-wheelbase RX L series, and the all-new, fourth-generation ES series.
- More than a half-dozen self-charging hybrid models such as the UX 250h, NX 300h, ES 300h and more. Many of these will be available for test-drives during the show.
- Experience the blend of style and performance that is Lexus F SPORT performance packages – available on everything from the ES, GS and LS series sedans, to the RC and LC series coupes, to the UX, NX and RX series crossovers and SUVs.
- Learn about advanced yet intuitive Lexus technologies for connectivity, entertainment, and safety.