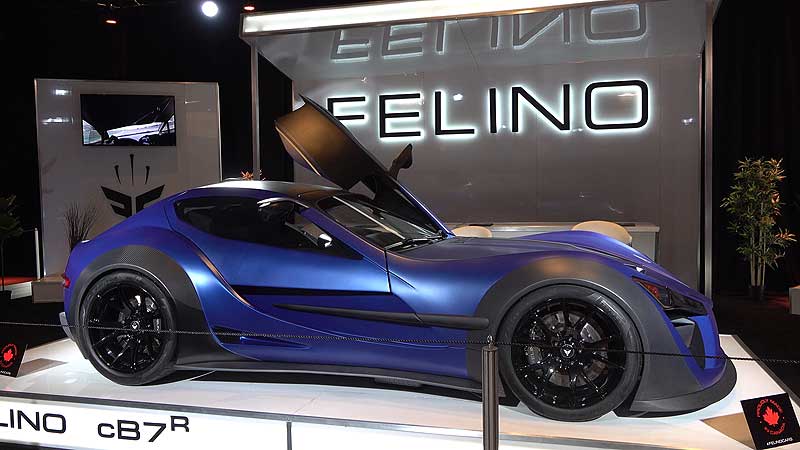 - The FELINO project - A pilot behind the wheel. -
FELINO is a supercar manufacturer based in the Greater Montreal area (Canada). Designed by Canadian racing driver Antoine Bessette, the FELINO cB7R stands out with its raw performance and unique lines.
Targeting an experienced clientele of sports driving enthusiasts, FELINO competes with major international manufacturers in the high-end supercars segment.

After being nominated Canadian racing champion in 2005 by ASN Canada FIA and passionate about cutting-edge automotive technologies, Antoine Bessette began, in 2010, after an international racing career, the design of a world-class supercar able to offer the enthusiasts and thrill seekers a "Formula" type race car driving experience.

A successful bet. In 2012 and 2014, after three years of research and development, FELINO releases the first two generations (track version) of the FELINO cB7. In order to recreate the "Grand Prix thrills", the cars were tested on renowned racetracks such as the Gilles Villeneuve circuit in Montreal and the prestigious Area 27, in the heart of the Okanagan (British Columbia). These prototypes led to the final version of the cB7 (track) with the first car sold and delivered in 2017.

In 2019, FELINO expands the cB7 family with the development of a road version: the 700 horsepower cB7R.
FELINO already has a long and enviable list of prestigious partners, media hits, and participation to specialized events and international exhibitions. The company has been the highlight of several auto shows and was mentioned in prestigious magazines like GQ, Robb Report and Dupont Registry. What’s more, the cB7 joined the rank of Gameloft International’s video game Asphalt 8: Airborne car list (2013).