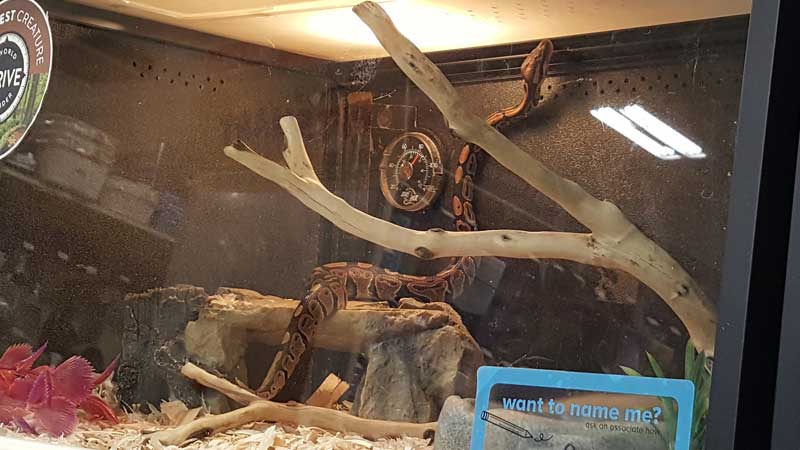 The global charity World Animal Protection wants PetSmart to end the sale of reptiles and amphibians as exotic pets. This would save animals and help end the cruel wildlife trade says the charity. The wildlife trade is a multi-billion-dollar industry that risks public health, biodiversity, ecosystems and is a significant source of animal suffering. The global charity is asking PetSmart to value the lives of animals over profit.

"PetSmart showed themselves to be a leader when they chose not to sell kittens and puppies out of concern for their welfare, but they have ignored the welfare needs of other animals like reptiles and amphibians," says Michèle Hamers the Wildlife Campaign Manager for World Animal Protection. "PetSmart has an opportunity to once again show their customers that they care about all animals."

Whether these animals, which include snakes, tortoises and frogs, are captured from the wild or are bred in captivity, they can suffer immensely and many die prematurely. Animals are exposed at every step of the trade to stress, from transportation and handling, to being kept in conditions that fail to meet their complex needs. This can lead to physical and psychological issues.

For example, Ball pythons normally live freely in a natural environment where during the day they hide in burrows, and at night they leave their shelters to go hunt. In a store, Ball pythons are kept in small enclosures, which restricts their movement and other natural behaviours. It is generally accepted by animal welfare experts that space and providing choice are important for good animal welfare.

Adding to the problem, many of the 1.4 million wild animals kept as pets in Canadian homes were purchased on impulse. A 2018 Stratcom study commissioned by World Animal Protection, found that 30% of Canadians spent a few hours or less researching an exotic animal prior to their first purchase and 46% rely on their local pet store to provide accurate information on the care and keeping of animals.

"As a trusted brand, PetSmart has a duty to stop the sale of these animals and to educate their customers that wild animals don't make good pets," says Hamers.

The burden of unwanted pets often lands on animal shelters and many are already stretched to capacity. Furthermore, some exotic pets end up abandoned on the streets.

Health risks are another cause for concern. Public health agencies warn against the keeping of reptiles and amphibians in households with young children, people over 65, or anybody who has a compromised immune system. Reptiles and amphibians are carriers of salmonella, which can be transmitted directly to humans and has led to outbreaks in Canada.

Wild animals carry diseases with them, in fact 75% of all new or emerging infectious diseases over the past three decades originated from animals and principally from wildlife. Reptiles and amphibians are known carriers of at least 46 different zoonotic diseases.

"We're encouraging people to speak out about their concerns and to sign our petition asking PetSmart to stop selling reptiles and amphibians. We know that animal lovers, many of whom are PetSmart customers, want to protect all animals from suffering and with their powerful voice, we can help make a change," says Hamers.