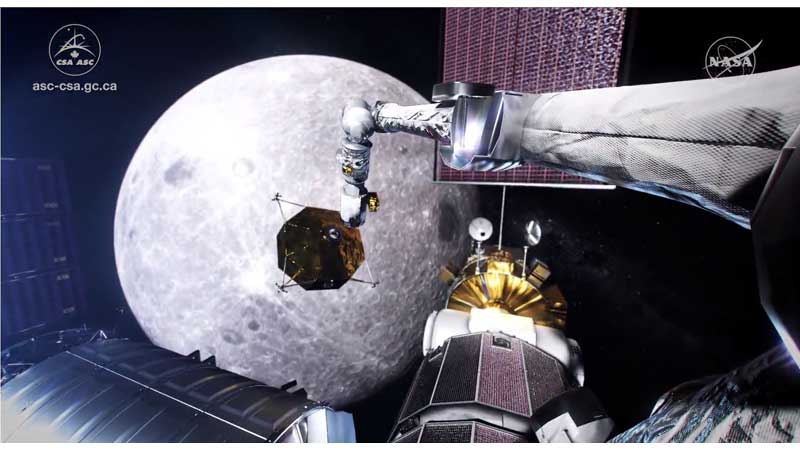 Canadarm3 one step closer to the Lunar Gateway

- Canada looks to Canadian company MDA to build robotics interfaces for the Gateway. -

Canada is paving the way for its participation in humanity's return to the Moon. Today, the Honourable François-Philippe Champagne, Minister of Innovation, Science and Industry, announced Canada's intent to enter into a contract with Brampton-based company MacDonald, Dettwiler and Associates Ltd. (MDA) to design, manufacture, test, and deliver robotics interfaces that will allow Canadarm3 to operate on the Lunar Gateway.

The Gateway External Robotics Interfaces are fixtures that will be installed on Lunar Gateway modules and on visiting vehicles for future deep-space missions. They will allow Canadarm3 to anchor itself and move around the Gateway, and to retrieve payloads delivered on logistics vehicles and reposition them on the station. The interfaces will also supply power and data connections to the robotic elements and any attached payloads.

Canada was the first country to join the United States on plans for the Lunar Gateway, the next major international collaboration in human space exploration. Japan and the European Space Agency have since finalized agreements with NASA to contribute various Gateway components, laying the foundation for continued peaceful collaboration among spacefaring nations.

"Our government continues to support the development of advanced robotics tailored to a new chapter of lunar exploration. Canada's significant contribution to the Lunar Gateway promises to spark innovative opportunities and important economic benefits for the country's space sector."

- The Honourable François-Philippe Champagne,
Minister of Innovation, Science and Industry

- Canadarm3 is Canada's contribution to the Lunar Gateway. It includes a large and small robotic arm capable of performing tasks in space without human intervention.
- The first two elements of the Gateway – the Power and Propulsion Element and the Habitation and
Logistics Outpost – will launch in 2024. The Gateway External Robotics Interfaces need to be added to these elements before they launch.