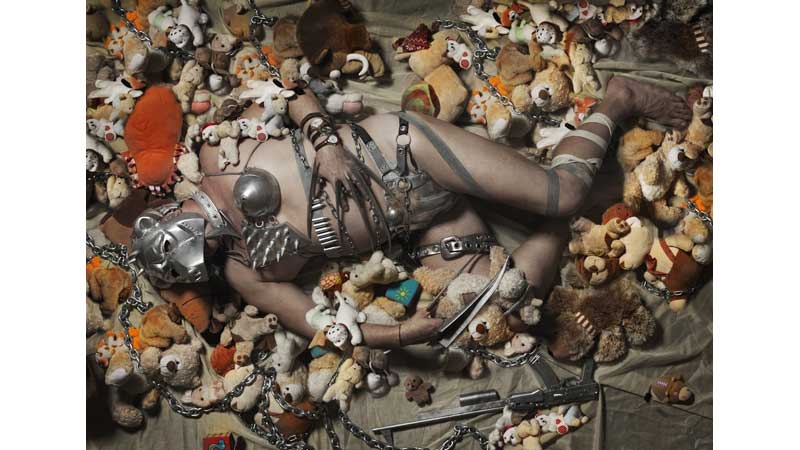 Renowned Ukrainian artist, Mykola Zhuravel, and his partner, Daria Tishchenko, witnessed firsthand the turmoil and uprising that led to the ouster of former Ukrainian President Viktor Yanukovich during the 2014 Revolution, and the ongoing political tensions that have reached a boiling point with Russia's hostile attack on Ukraine. Zhuravel, a contemporary painter and sculptor who has represented Ukraine at the Viennese Biennale, together with Ms. Tishchenko, developed the exhibition, Invasion Redux, that first premiered in North America in New York in 2016. The multi-media exhibition poignantly transforms their memories of the uprising and its aftermath into vivid abstract portrayals – artworks, sculpture, photography and film – that encapsulate what it is like to live in the shadow of a hostile giant.

Executive Director of the Canadian National Exhibition Association (CNEA), Darrell Brown, met with Mr. Zhuravel in Kyiv in August 2021 and January 2022. Ironically, their first meeting was on the day Ukrainian forces were parading their military apparatus on Khreschatyk practicing for their Independence Day parade. In January, with Russian armaments stockpiled and troops at the border, Brown suggested that it was time to re-open Invasion Redux and offered to host the exhibition at the CNEA's Withrow Common Gallery.

"The world has responded with shock, sorrow and anger at the unwarranted attack Russia has launched on its Ukrainian neighbours. But for some like Zhuravel and Tishchenko, the current turmoil is a mere extension of the hostilities initiated in 2014, when Russia annexed Crimea and, through its conduits, occupied the Donbas and Luhansk," said Brown.

"Toronto is home to 65,000 Ukrainians, and we stand strong with the Ukrainian community. We are now in the process of assisting Mr. Zhuravel and his family to obtain travel visas to Canada to present this timely and transformative exhibition."

At age 61, Zhuravel was permitted to exit Ukraine with his family though the journey was an arduous, stressful and lengthy one. In a sense, this trek will take him full circle as Zhuravel's grandfather emigrated from Canada to Ukraine in 1916.

Contents of the Invasion Redux exhibition are currently en route. The CNEA is holding the space in Withrow Gallery, and once the family arrives and the exhibition is curated, it will be ready for opening – planned for April 2022. All profits from the ticket sales will be donated to assist with the humanitarian aid efforts to help Ukrainians who are now facing such incredible turmoil.

Mykola Zhuravel is a distinguished Ukrainian painter and sculptor whose works have been exhibited internationally, including in Canada, the US, Ukraine, Italy, Germany, and Japan. Combining classic artistic traditions, a Ukrainian worldview and a deeply personal sensation of life and peace, he creates works that search for compatibility between mankind and earth. Seeking to break down boundaries between painting and sculpture, Zhuravel's resulting pieces appear vibrant, multi-faceted and inventive. Zhuravel graduated from the Kyiv State Arts Academy in 1989. His works are held in private and institutional collections in Ukraine, Western Europe, Canada and the United States. Zhuravel represented Ukraine in the 54th Venice Biennale. He lives and works in Kyiv, Ukraine, often collaborating with his wife and partner, photographer and filmmaker Daria Tishchenko-Zhuravel.