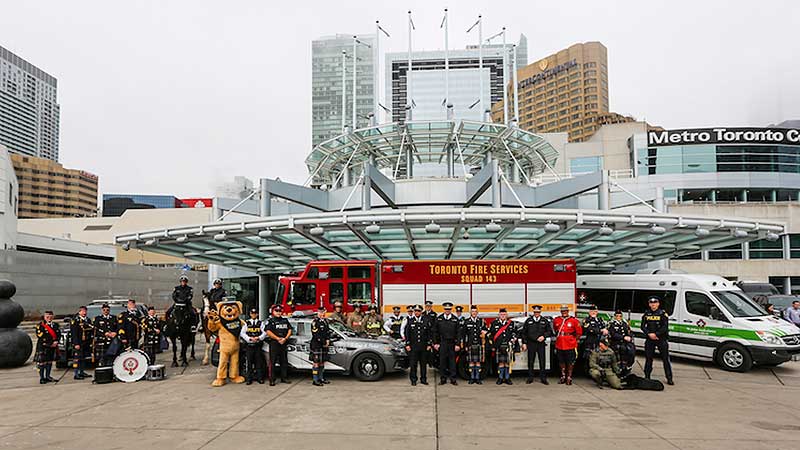 (CIAS 2017, Toronto, February 22, 2017) — Visitors to the 2017 Canadian International AutoShow Wednesday on Heroes Welcome Day got a preview of an international competition coming to Toronto in the fall that will celebrate wounded warriors from around the world.

The Invictus Games — founded by Prince Harry in 2014 — will be held in Toronto from September 23rd to 30th, bringing more than 550 competitors from 17 nations who have been injured in combat.

Invictus Games CEO Michael Burns spoke on the AutoShow Live Stage Wednesday, telling the crowd that the Toronto Games will be the largest yet.

The mission of the Games is to use the power of sport to inspire recovery, support rehabilitation and generate a wider understanding of those who serve their country, and their loved ones.

Burns said he expects the Games to resonate with millions of Canadians across the country.

«More than two thirds of Canadians know someone who has served or is serving in the Armed Forces,» he said. «That’s an incredible position of affiliation, of strength, of awareness. Canadians do have a sense of the unique challenges our military families face.»

Heroes Welcome Day at the AutoShow honoured and celebrated police officers, firefighters, paramedics and armed forces personnel with a special discounted ticket offer. Special programming for the day also allowed members of the public to meet emergency workers from various services and learn about the important work they do.

During a tour of the Show floor Commissioner Hawkes and others got to check out the view from the driver’s seat of a beautiful Pagani Huayra and other exotic cars. Dignitaries from some of the services also took part in presentations on the AutoShow Live Stage. In addition to the presentation on the upcoming Invictus Games, Show visitors heard from OPP Commissioner Hawkes, who discussed the modernization of the service, and a panel discussion by several first responders who talked about their roles.

At the halfway point of the 2017 AutoShow, 206,224 patrons have come to the Metro Toronto Convention Centre to see the stunning array of new cars and trucks, concept vehicles, muscle cars, classics, luxury cars and Formula 1 racers, a pace that is 11% ahead of last year’s record-setting numbers, when the 2016 AutoShow drew more than 320,000 people over its 10 days.

Following its record-setting start, the AutoShow promises to continue delivering great entertainment value and automotive action for the remainder of the week.

Coming up on the AutoShow Live Stage on Thursday will be:
- Noon: Georgian College presentation on automotive careers.
- 2 p.m. OPP presentation on recruiting.
- 4 p.m. An interview with three-time Canadian driving champion Bill Brack about Formula One.

The Canadian International AutoShow is being held at the Metro Toronto Convention Centre between February 17th and 26th. Please visit autoshow.ca for more information. Follow us on Instagram @cdnintlautoshow, chat with us on Snapchat at autoshowcanada, Like us on Facebook and join the conversation on Twitter @autoshowcanada with the hashtags #AutoShowOhCanada and #CIAS2017.