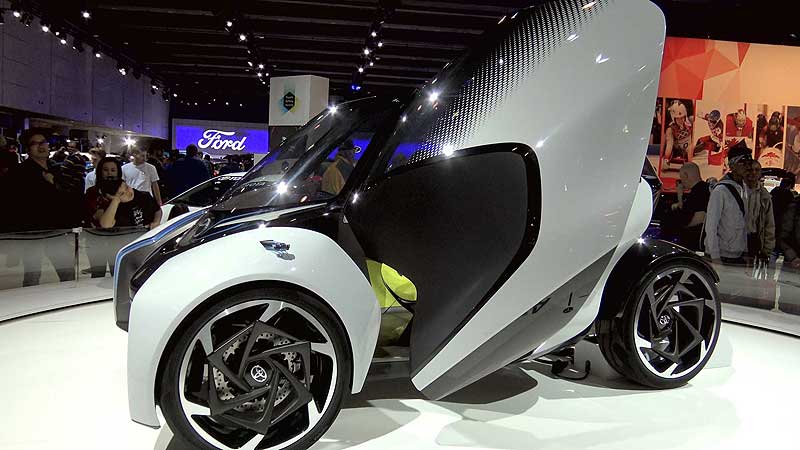 (Toyota, February 2018) - Designed in collaboration with Toyota's ED2 design studio, the new i-TRIL could be the future of autonomous urban driving.

More than four years after Toyota unveiled its leaning, self-driving, pimped-up tricycle, the i-ROAD, the Japanese firm is back with a four-wheel successor.

Making its world debut at the 2017 Geneva motor show, and featuring Active Lean technology, the new i-TRIL concept represents a viable alternative to A and B segment cars, other EV products, public transport and motorcycles.

The i-TRIL has been developed with a new type of customer in mind: a sophisticated, single, 30-50 year old active female with two children and a vibrant lifestyle. And she lives in a SMESTO (Small to Medium Sized TOwn)...

European Union studies on the future of cities have suggested that, rather than further expansion of already vast metropolitan areas such as London and Paris, the continent will witness a steady increase in growth of built-up areas adjacent to existing cities, in the manner of medium-density suburban pockets of deve-lopment.

The number of such SMESTOs in Europe is already significant, and their inhabitants travel extensively to take children to school, shop, visit restaurants and socialise. As such, their sometimes difficult, stop-start mobility requirements are for small, agile and urban-friendly vehicles.
Toyota’s research with SMESTO-dwelling target customers identified an active mother often torn between ‘Me Time’ and spending time with her children ‘Kids Happy’; increasingly confident in her behaviour, she refuses to be a slave to those children.

The new i-TRIL Concept embraces and mer-ges this apparent conflict of loyalties through three functions: Active Lean technology; ‘Relaxed Engagement’; and the unique One-plus-Two seating layout of the vehicle.

Having inherited features from Toyota's IQ and Aygo, the i-TRIL has a minimalist design to make the most of its interior. Its diminutive size befits that of a smart car, weighing just 600kg and measuring 3000mm long and 1,510mm high, with a one-plus-two seating layout.

In the back, a two-seat bench fits above the separate rear axle where the electric motor drive system sits and, because of its autonomous features, the car has no need for pedals.

Steering, acceleration and braking are all controlled by drive-by-wire technology, but the driver can take control at any time using left- and right-hand manual controls, similar to those on gaming controllers.

Powered by an electric motor, the i-TRIL has a target driving range of more than 185 miles (300km) on a single charge.

The positioning of the front seat is "relaxed", yet high enough to allow for clear visibility of the road - likened to that of a go-kart. The addition of butterfly-opening doors, hinged on sloping front pillars, make for easy access for driver and passengers.

An additional hinge between the rear axle and the cabin allows the front wheels and body to lean into turning while the rear wheels remain perpendicular to the road surface. Called Active Lean technology, Toyota first introduced this system to its i-Road, but the i-TRIL has been adapted to include a 10-degree angle to optimize stability and cornering. Like the Toyota IQ, the i-TRIL's four-metre turning circle should be useful in crowded urban areas.

Style was apparently a careful consideration when designing the i-TRIL - Toyota said it has deliberately fashioned the concept to veer away from "overtly automotive designs". Instead, the interior uses only recycled materials, from the Alcantara-like trim and upholstery, to the wooden-floor finish.
* * *