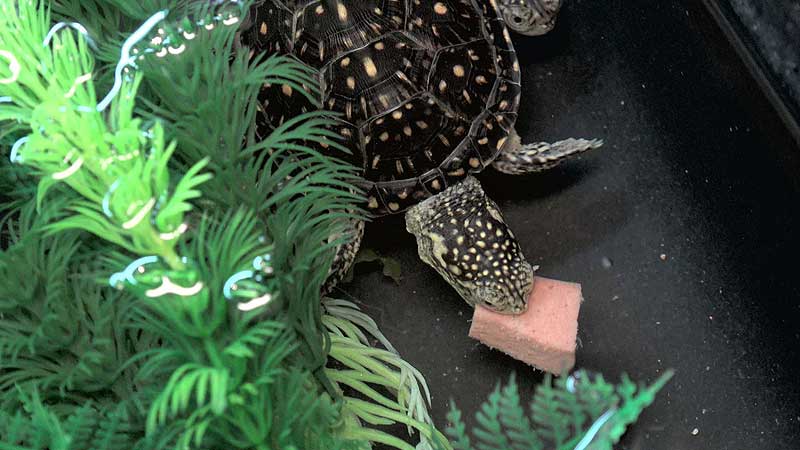 The Toronto Zoo along with Parks Canada, Toronto and Region Conservation Authority (TRCA), University of Toronto Scarborough (UTSC) and the Ontario Ministry of Natural Resources and Forestry (OMNRF) are proud to announce an exciting new opportunity for members of our community at the Toronto Zoo. The new Blanding’s Turtle Exhibit is now open in the Americas Pavilion for guests of the Toronto Zoo to see and experience. This new exhibit offers a turtle’s-eye-view of one of the Toronto Zoo and Parks Canada’s most successful conservation programmes!

One of the Zoo’s well-known head-starting programmes involves the Blanding’s turtles, a species that was about to disappear from the Rouge Valley, and now is being reintroduced into Rouge National Urban Park. Like the many other conservation breeding and release programmes at the Zoo, most of the work is done behind-the-scenes. Now, Zoo members and guests will have the opportunity to see these turtles firsthand in a new exhibit in the Americas Pavilion. This head-starting project was made possible with the support of many partners including Parks Canada, TRCA, UTSC and the OMNRF.

“By reintroducing Blanding’s turtles to Rouge National Urban Park, Parks Canada is working with the Toronto Zoo to take significant action towards conserving and restoring a threatened species to important wetland habitat in the GTA,” says Gary Anandasangaree, Member of Parliament for Scarborough–Rouge Park. “Parks Canada is a recognized leader in conservation. Through its Conservation and Restoration Program and other innovative initiatives, Parks Canada takes actions to preserve national protected areas and contribute to the recovery of species-at-risk, like the Blanding’s turtle.”

“Blanding’s turtles are a flagship species representing a group of animals facing a variety of threats. Seven of eight turtle species in Ontario are at risk and need our help,” says Robin Hale, Interim Chief Executive Officer, Toronto Zoo. “The Toronto Zoo’s new Blanding’s Turtle Exhibit is a unique opportunity for our community to see these turtles and support our efforts to save species in our own backyard.”

These Blanding’s turtles were rescued as eggs from non-viable nests in a stable source population in southern Ontario and have been raised in a protected environment at the Toronto Zoo for two years. Giving these turtles a ‘head-start’ in life, the Zoo has raised them past their most vulnerable stages where they would otherwise have faced an increased chance of predation from animals like raccoons. The UTSC has joined this head-starting project and is assisting with long term monitoring of the released turtles. Parks Canada, the TRCA, the OMNRF, and the Toronto Zoo believe that this type of head-starting and reintroduction of the turtles, along with long term monitoring and ongoing habitat restoration, are keys to the species’ survival in the Rouge National Urban Park.

After extensive design, testing and tweaking, the Toronto Zoo’s Adopt-A-Pond Programme is proud to announce the official launch of a new citizen science app that will take our Turtle Tally and FrogWatch programmes to the next level! The Toronto Zoo’s Adopt-A-Pond Wetland Conservation Programme works to design and deliver impactful conservation-focused research, restoration, and outreach that highlights the importance of saving Canada’s sensitive wetland species and their habitats. This app is the next step in reaching out to engage more Canadians in protecting local biodiversity through citizen science.

The Adopt-A-Pond App is fun and easy to use and, with you assisting our biologists, we can map where these threatened and endangered native species can be found. You can download this app through the IOS App Store and Android Google Play Store today!

The Toronto Zoo and TRCA began collecting information on and monitoring Blanding’s turtles in the Rouge Valley in 2005. Environment Canada and the Ontario Ministry of Natural Resources and Forestry provided funding, permits and in-kind support for Blanding’s turtle monitoring in the Rouge Valley in previous years. With the area slated to become Canada’s first national urban park, Parks Canada has come on board and will continue to work on a long-term turtle monitoring program. Earth Rangers, an environmental conservation organization focused on engaging youth in the protection of nature, also provided support for a facility to house the turtle eggs and babies at the Toronto Zoo.