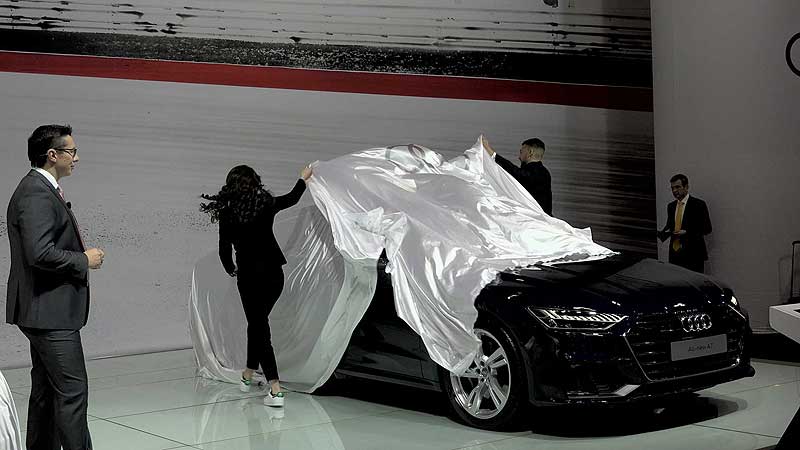 The new Audi A7 Sportback: Sportiness in its most beautiful form

The new Audi A7 Sportback is a new style of Gran Turismo, offering systematic digitalization, a dynamic driving experience and a space concept that combines a wide range of customer requirements. The large four-door coupé is the essence of Audi’s new design language.

The second-generation A7 Sportback is the essence of Audi’s new design language and brings the show car design of the prologue studies to production. The four-door coupé is full of innovations – in terms of networking and digitalization, the sporty-confident driving experience, as well as its versatile space concept.

The wide, low Singleframe grille and prominent air inlets express the dynamic character of the Gran Turismo at first glance. With the two optional headlight variants, twelve separate horizontal lighting strips create the lighting signature. Topping the line are the HD Matrix LED headlights with Audi laser light, which can be recognized by the blue marker in the reflector.

Viewed from the side, pronounced contours emphasize the large wheels –a reference to Audi’s quattro genes. The sharply dropping roof line dominates the silhouette. The large coupé is 4.97 meters (16.3 ft) long and 1.91 meters (6.3 ft) wide, but just 1.42 meters (4.7 ft) high. Its rear is tapered like a yacht. A spoiler integrated into the long luggage
compartment lid extends electrically at 120 km/h (74.6 mph). A light strip connects the rear lights, whose outer rear lights comprise 13 segments each. When the doors are unlocked or closed, dynamic lighting animations in the rear lights and headlights showcase the Audi A7.

The new Audi A7 Sportback’s drive system is now even more efficient thanks to a new mildhybrid system (MHEV). At market introduction the coupé will be available with either a 3.0 TFSI or a 3.0 TDI engine. With either engine, the MHEV system is based on a 48-volt primary electrical system and a belt alternator starter (BAS) generating up to 12 kilowatts of recuperation power. The A7 Sportback can coast with the engine off over a wide speed range and then restart smoothly via the BAS. The start-stop function now activates at 22 km/h (13.7 mph). The 3.0 TFSI is mated to a seven-speed S tronic; the 3.0 TDI to an eight-speed tiptronic. In combination with the S tronic, the quattro drivetrain uses the efficient ultra technology that activates rear-wheel drive as needed.


The body concept: Coupe, Sedan and Avant in one

The design of a coupe, the space of a sedan and the variability of an Avant – the new Audi A7 Sportback combines the best of three worlds. Compared to the predecessor model, its interior has grown in length by 21 millimeters (0.8 in). The luggage compartment has a base size of 535 liters (18.9 cu ft) and can be expanded up to 1,390 liters (49.1 cu ft) with the backrests folded down. Body attachments are made of lightweight aluminum. The Gran Turismo gets top marks for stiffness, crash safety, aerodynamics and aeroacoustics.