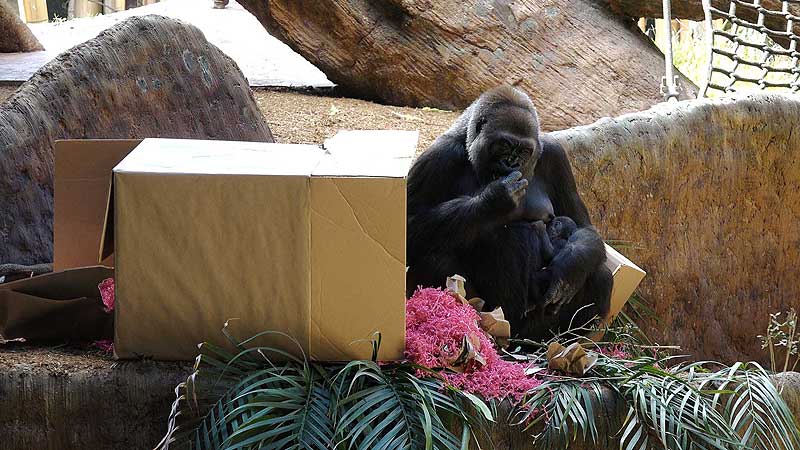 The Toronto Zoo hosted a name and gender reveal event this morning in the African Rainforest Pavilion for the Zoo’s latest addition, a baby gorilla born on Thursday, June 7, 2018. The Zoo is excited to announce the confirmed gender of the baby gorilla is female and she will be named ‘Charlie’. With Father’s Day right around the corner, it is fitting the new female gorilla has been named ‘Charlie’ by Wildlife Care Staff as a namesake of her father Charles, the Zoo’s 46 year-old silverback male and patriarch. Charles came to the Toronto Zoo as an orphan in 1974 and has come to be one of our most iconic Zoo residents. He has proven himself to be an ideal example of what a silverback represents, siring 10 surviving offspring and being grandfather to six gorillas. The keepers traditionally name the baby with the first initial of their mother’s name however, they felt that with this new birth it was time to honour the patriarch of the Toronto Zoo’s Western lowland gorilla troop, Charles.

Mom, 20 year-old female Ngozi, and baby Charlie are both healthy and are doing well, and Wildlife Care Staff will continue to monitor their development. You may catch a glimpse of Ngozi and her newborn in the African Rainforest Pavilion. Please note there is no confirmed viewing schedule. This is Ngozi’s third offspring. Her first son Nassir, was born at the Toronto Zoo on September 2, 2009 and her first daughter Nneka, was born at the Toronto Zoo on January 10, 2014. Ngozi, came to the Toronto Zoo from the Woodland Park Zoo in Seattle on March 4, 2008, as a breeding recommendation through the Western Lowland Gorilla Species Survival Plan (SSP) program for Charles. This newborn is the 10th of this critically endangered species to be sired by Charles and born at the Toronto Zoo. This newest female addition to the Zoo’s family is genetically significant for the North American Western lowland gorilla population.

“We are very excited that Charlie is a girl,” says Maria Franke, Curator of Mammals, Toronto Zoo.

“Gorillas live in family troops with one mature silverback male, multiple females and their offspring. Charlie will be able to live in the family group for many years where she will learn family dynamics from the other females, including her older sister Nneka. Charles is genetically important and a very special animal and Charlie is poised to follow in her dad’s footsteps.”

The Toronto Zoo is part of the Western Lowland Gorilla Species Survival Plan (SSP), which aims to establish and maintain healthy, genetically diverse populations, and overall conservation efforts to save this incredible species. One of the Toronto Zoo's mandates is to educate visitors on current conservation issues and help preserve the incredible biodiversity on the planet. The Toronto Zoo is in a great position to bring forward the plight of the Western lowland gorilla and supports gorilla conservation efforts in the wild through such programs as PhoneApesTM cell phone recycling, keeper driven events and the Toronto Zoo Endangered Species Reserve Fund.